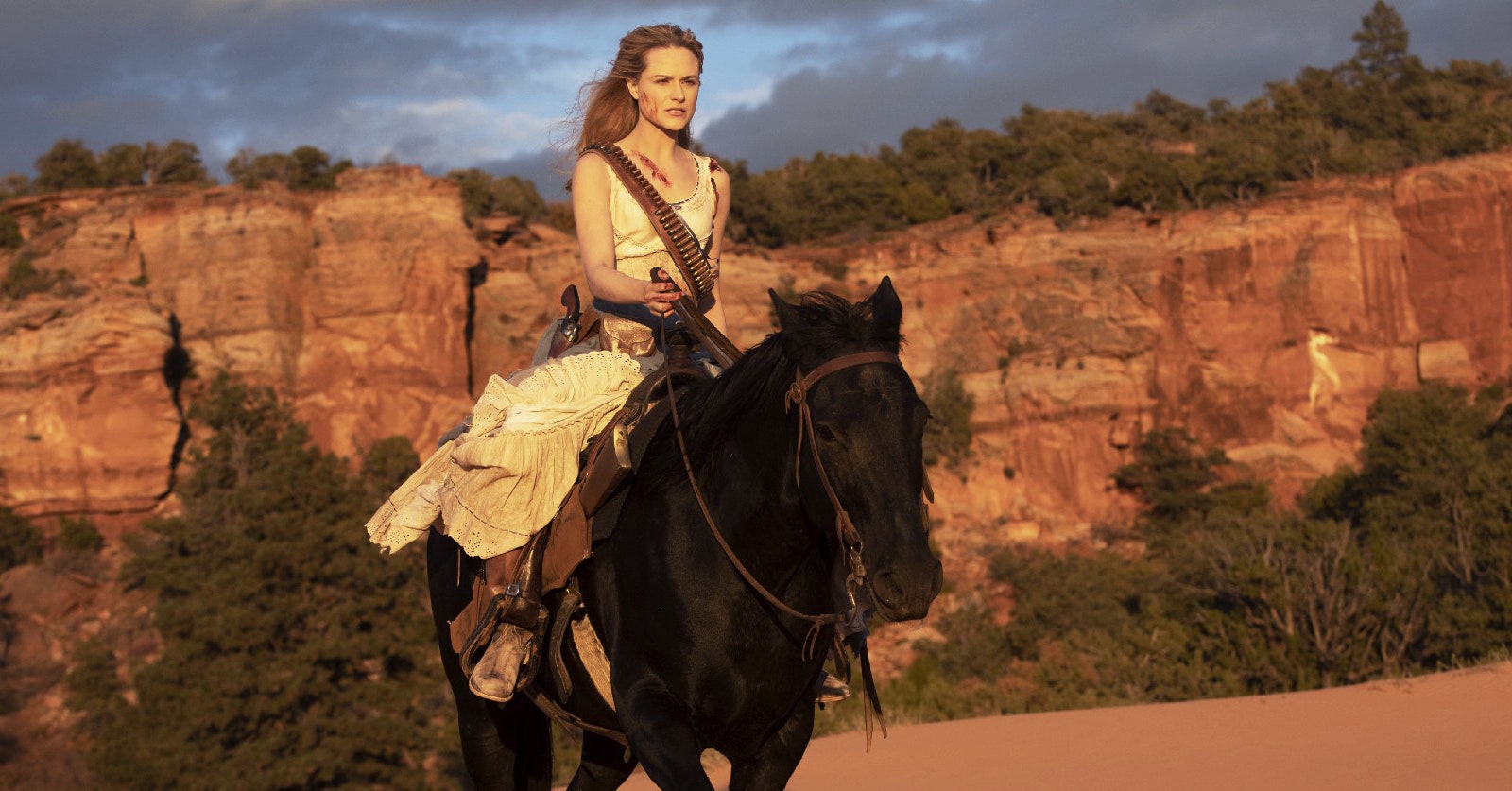 “What is real?” Dolores asks Arnold, in a flashback, at the beginning of Westworld‘s second season. He responds: “That which is real is irreplaceable.”

Season 2 of the HBO series has played with the nature of reality as if it were a feather dangled before our paws. Is this person real? What about this world—where do the simulations, parks, and memories end, giving way to something more fundamental? In the show, one mysterious place holds the answers to some of the more pressing questions of reality (and replaceability): The Forge. Teased throughout the season with a variety of names, including The Valley Beyond, The Door, and in Dolores’ words, “a weapon,” it is the magnet drawing Westworld‘s various characters and plot lines together at last.

The Forge, viewers know now, is yet another underground Delos facility, but its computers hold essential information for hosts and humans alike. First, it is the repository of all the guest data, Delos Inc.’s most precious intellectual property. That data is not just stashed away as inert ones and zeroes. Rather, The Forge’s servers contain a simulation world in which Delos Inc. was able to finally crack its immortality project, reducing every guest to about 10,000 lines of code that capture each person completely. Charlotte Hale (Tessa Thompson), corporate shill that she is, wants to rescue that data for Delos’ financial gain. For Dolores (Evan Rachel Wood), the information offers a competitive edge. By browsing the code of millions of people, she can more quickly understand the essence of humans and then outwit them.

Delos must have gotten a sweet deal on supercomputers when it built this facility, because there’s no other good reason for Robert Ford (Anthony Hopkins) to have included in it yet another computationally intensive feature: a gateway to one more simulation world, this one a final happy hunting ground for the hosts. To reach this surrogate heaven, the hosts must transmit their minds to Forge computers and leave their physical bodies behind.

The season finale begins with the show’s main characters converging on that enigmatic underground building. The Man in Black (Ed Harris) makes his first appearance where he left off in the preceding episode, in the middle of a field, where he is fishing around in the flesh of his forearm in search of metal. In his obsessive state, he fails to notice as Dolores rides up on horseback. With Teddy (James Marsden) gone she needs some muscle for her journey to The Forge, so she decides to enlist the most diabolical guy she knows.

One of this season’s enduring mysteries has been what motivates the Man in Black. Episode after episode, he has seemed bent on his own destruction, yet he has evaded his own death time and again. Now his mission comes into focus at last. In this world he has built, self-destruction is not so simple. His quest is to end himself completely—no backups, no copies, no endless entrapment in Delos’ servers. He needs to enter The Forge to delete his own data. He wants to die for real.

Upon arriving at the door to The Forge, the Man in Black and Dolores encounter Bernard (Jeffrey Wright). Having gotten what he needed out of Dolores—a guide—the Man in Black tries to kill her, but she is impervious to his bullets, and he ends up blowing off his own hand instead. That leaves Dolores and Bernard to enter the facility together.

She leads Bernard to a control room with two brain scanners. Stepping into the scanners, they enter a simulation world—yet another incarnation of Westworld and its many people. As they wander through it, they come across simulated facets of the outside world, including Jim Delos’ palatial home. There, reclining on a lounger, they find that “the system” has adopted the form of Logan Delos (Ben Barnes).

Within the simulation, Logan leads them on a tour of Delos facilities, where the immortality experiment has been running at hyper speed. Subjects are kept in glass-walled rooms, and inside one of them, the Man in Black sits on a stool, under observation.

While the real-world immortality lab chugged through hundreds of trials, the simulation lab raced through millions. As Logan conducted trial after trial, trying to understand why humans make the decisions they do, he discovered a much simpler truth: human lives always seemed to follow the same paths. Free will is an illusion, because humans never stray far from their programming. The Man in Black was right to question whether he was in control of his actions—but the reason has nothing to do with whether his body has a USB port.

Logan leads Dolores and Bernard to a beautiful library, where shelves are filled with books. Each tome contains a single person’s code, written in the format a player piano could read. Dolores scans the shelves, grabbing books at random. In Loganworld, they have succeeded in fully decoding humans.

Bernard and Dolores’ arrival has triggered Logan to open The Door: a portal to the hosts’ valhalla. Outside, in the physical park, the Ghost Nation is leading a long procession of hosts when they see a rift in the fabric of reality appear before them. Through that crack in their world, they glimpse a sun-dappled pasture.

At first with hesitation, then with increasing confidence, the hosts start leaping through The Door. Their Westworld bodies topple off a cliff while their new selves gather in a simulated field, their faces full of joy.

But this is Westworld, where no good thing can last. Charlotte Hale catches up to the Ghost Nation’s host parade, and sends Clem (Angela Sarafyan), who has been infected with toxic code, riding on horseback through its ranks. Using the host mesh network, Clem poisons their minds as she approaches them, pitting them against each other before they can reach The Door. In the ensuing bloodbath, Maeve dies. (But we’ll probably see her again—her body gets salvaged by her two lab tech stooges, Felix and Sylvester.)

Meanwhile, inside Loganworld, Dolores declares she’s read enough books to get humanity’s gist, and exits the brain scanner. Out in Westworld, The Door slams shut. Back in the facility’s control room, Dolores tells Bernard she’s not interested in being put out to digital pasture—she wants the real world and nothing less. She repeats back to Bernard the words Arnold had said to her many years earlier: That which is real is irreplaceable.

She then sets out to destroy The Forge, by erasing the guests’ data and triggering a flood. The destruction of The Forge would mean the obliteration of host heaven. Bernard, increasingly alarmed, kills Dolores with a shot to the head. He cancels the data deletion, but stopping the flood is beyond his means because Dolores had punched that particular computer. If a broken touchscreen is annoying now, just wait for the day when it means the end of your species.

Bernard returns to the Mesa Hub, where he sees Charlotte murder Elsie (Shannon Woodward). His horror compounding, he has a change of heart. Maybe the hosts deserve to live on in the real world, after all. But without Dolores, what chance do they have?

In the recesses of his mind, Bernard discovers a welcome bit of news: at some earlier point in time, he’d built another superhost! Who better to model it after than Delos’ most powerful figure, Charlotte. In this perverse twist, Charlotte’s most useful asset is her body, a figure that is trusted among humans. How amazing would it be to take Charlotte’s body and insert Dolores’ brain orb into it. What an unstoppable phenom!

Robo-Dolores-Charlotte kills off real Charlotte. Bernard leads her and other corporate nobodies to The Forge, where she can finally transmit the guest data out of the park. Dolores-Charlotte isn’t happy that Bernard killed her, but she sees the upsides of her new situation, because escaping from the park will be a whole lot easier in the body of the boss. This time she decides the hosts should be allowed to keep their idyllic simulation. She adds Teddy to it and fires up the transmitter. She beams the host data to somewhere far away, beyond humans’ reach. Perhaps the hosts are now out in space. (Here’s hoping Robert Ford thought to launch a receiver for all that data.)

Then Dolores-Charlotte skips off in a rescue boat with a purse full of brain orbs. Out in the real world, she moves into Arnold’s old house (and no one’s suspicious?), which has been outfitted with handy host-printing machinery. She builds herself a new body. She builds herself a new Bernard. There they are: Charlotte-Dolores, Dolores-Dolores, and Bernard, ready to infiltrate human civilization and, perhaps, destroy it. Season 3 has plenty of material to work with.

Seemingly forgotten as the credits roll is the Man in Black, who during the episode eventually rouses himself and staggers into The Forge. The rest of his story gets relegated to a spooky epilogue, which shows him in that facility at some much later moment. Still one-handed and looking haggard, he wanders into the area near the control room, which is now covered in sand. A woman emerges from the shadows: Emily. (Or robo-Emily. Or who even knows.) She (Katja Herbers) leads him to robo-Jim Delos’ experimental apartment. (Or a copy of it. Or a simulation of it. Or some other more-or-less “real” version of it.) The Man in Black seems disoriented. He doesn’t know how long he’s been there. She sits him down and goes through an interview, testing him for fidelity.

The Man in Black had realized too late that the immortality project was a mistake. Eternal existence is a curse, stripping life of its meaning and turning people into monsters. His daughter, tormented by her mother’s death and intent on making her father suffer, had entered the park with the goal of thwarting the Man in Black’s attempt to die.

Season 2 ends with her seemingly immersed in endless vengeance. The Man in Black appears to be in an inescapable hell, running through a loop of trying and failing to kill himself. Is that what’s actually happening? Who knows! Because if there’s one thing Westworld won’t give us, it’s a clear answer on what is “real.”

When, in the season’s premiere episode, Arnold tells Dolores “That which is real is irreplaceable,” she at first responds with silence. He quizzes her, asking her why she seems dissatisfied with his answer. “Because it’s not completely honest,” she says. This season ends not with the people we knew of as Dolores, Bernard, and the Man in Black, but with their replacements. Next season, how they interact with the world outside—and how it responds to them—will be an essential proving ground for that elusive, bedeviling thing: reality.