The economic calendar is another big one, with an emphasis on the employment situation. Despite this, everyone will be scrambling to analyze the tax cut legislation. I expect many to be asking:

What do the tax cuts mean for financial markets?

In the last edition of WTWA I predicted that attention would turn to the tax cut debate, with little attention to the economic data. That was an accurate guess, as the story took many twists and turns. My forecast that the legislation would not pass was mistaken. This broke my long string of successful forecasts of decisions on policy matters.

The Story in One Chart

I always start my personal review of the week by looking at a great chart. Jill Mislinski’s weekly version is first-rate, pulling together several key points in a single look. She notes the highs and lows of the week, the nearness to the record high, the overall weekly change, and the intra-day excitement on Friday. 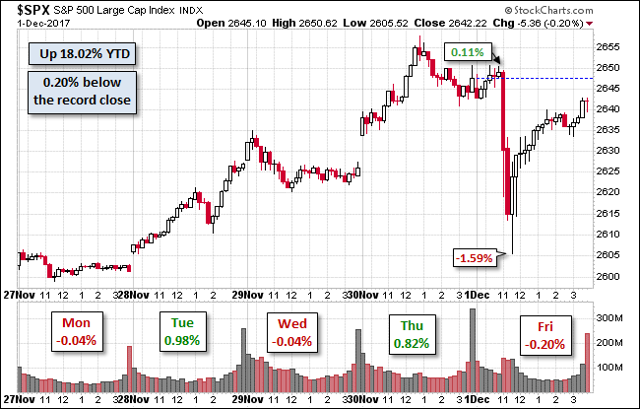 The rest of the weekly post provides charts on drawdowns, volume, volatility and other key factors. Check it out. Meanwhile, let’s treat ourselves to an additional look at a long-term perspective. 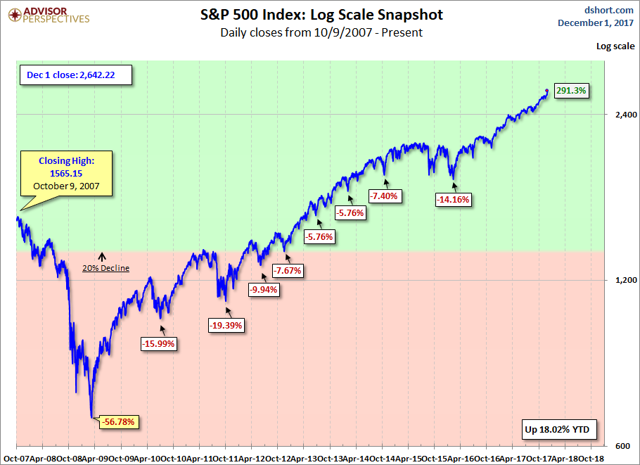 I enjoyed my (LONG) week in San Diego, a beautiful place, especially as an escape from a Chicago winter. Competing with the top professionals from all over the world forces you to forget about your regular work – at least for a while. This week was a challenge, since the market news was so interesting. On an off day I went to the Midway museum. Several of the docents were former pilots, and their descriptions were great.

Here is a fact that is a bit counter-intuitive. After touching down in an area about the size of a tennis court, with speed right and the angle of attack correct for the tail hook to grab a cable, what is the first thing a pilot does? (Answer at the end).

By the way, those who believe there are no experts should try some competing in something!

The economic news continues to beat (or nearly match) expectations on a wide array of measures. This is true even though the expectations are significantly higher than usual. Last week we had strong data on housing, auto sales, GDP revisions, the ISM index, and consumer confidence. Earnings expectations remain positive.

We would all like to know the direction of the market in advance. Good luck with that! Second best is planning what to look for and how to react.

We have a big calendar with an emphasis on employment. The ADP report deserves attention as an independent measure with a good approach, but most will focus on Friday’s official data.

Briefing.com has a good U.S. economic calendar for the week (and many other good features which I monitor each day). Here are the main U.S. releases. 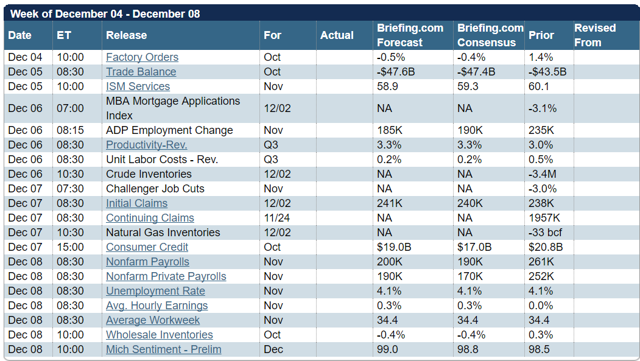 Despite the always-important employment news, financial media will emphasize the tax cut legislation, the likely result of the House/Senate Conference, and the implications for financial markets.

Please note! There is plenty of political commentary on this topic. The heated debate continues, and it is good fodder for financial bloggers and news media of all types. That is not my mission. We should accept the reality of the new policy and think about our best investments.

I was not alone in my surprise at the Senate success in passing a tax cut bill. This will be a great case study for students of Congressional politics – a classic example of how to build a coalition. The concessions to individual Senators, leading to hand-written changes in the bill, were classic. The big surprise was getting the deficit hawks on board. The tax cut argument has always been that lower taxes will pay for themselves through economic stimulus. CBO rules do not allow “dynamic scoring,” so these possible effects are not considered. Congress’s own Joint Committee on Taxation concluded that the bill would add $1 trillion to the deficit, even allowing for growth.

The innovative compromise dodged the economic debate. Basically, the decision was to try the cuts, but increase taxes if growth did not respond enough. I was mistaken in my belief that the deficit hawks would stand firm. Only Bob Corker did so. But our focus should turn from how the coalition was assembled to what it means for financial markets. What should we expect?

The Wall Street Journal has a good analysis of the differences in the House and Senate versions, which must be resolved in a Reconciliation Committee. 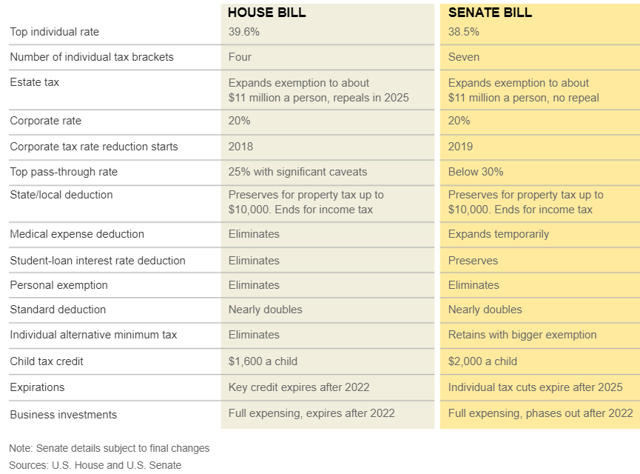 There are several different effects to analyze: 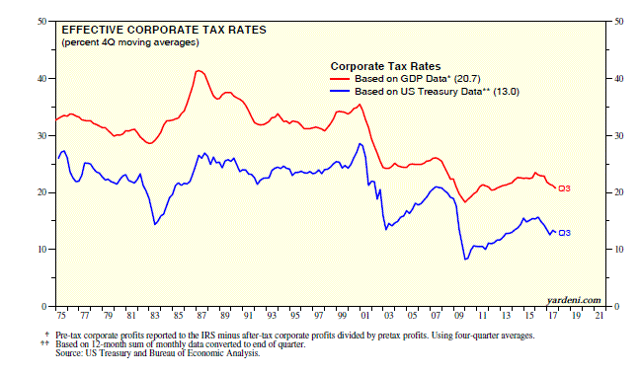 As usual, I’ll have more in the Final Thought, where I always emphasize my own conclusions.

We follow some regular featured sources and the best other quant news from the week.

I have a rule for my investment clients. Think first about your risk. Only then should you consider possible rewards. I monitor many quantitative reports and highlight the best methods in this weekly update. 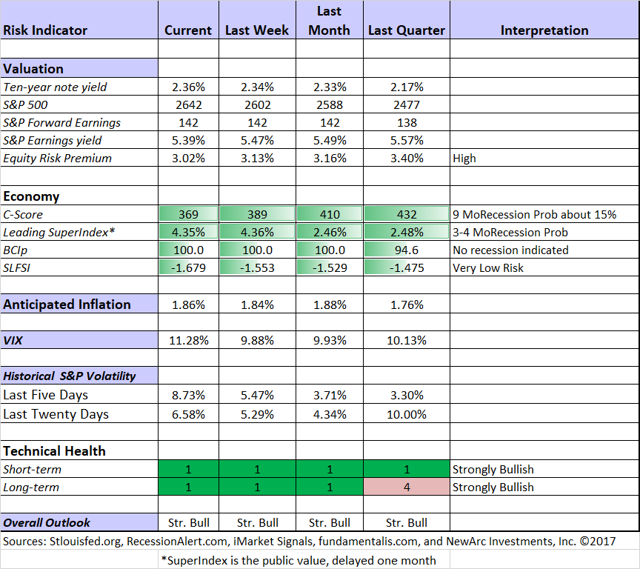 Recession odds remain low and many economic indicators are improving.

RecessionAlert: Strong quantitative indicators for both economic and market analysis.

Brian Gilmartin: All things earnings, for the overall market as well as many individual companies.

Doug Short: Regular updating of an array of indicators. Great charts and analysis. Let’s take another look at the regular update (via Jill Mislinski) of the Big Four indicators most influential in recession dating. The recent strength in these indicators is clear from the chart.

Davidson (via Todd Sullivan) continues his record of strong market analysis. His unique valuation approach considers both interest rate spreads and the Chemical Activity Barometer as an economic proxy.

The Dallas Fed reported its inflation measure, the 12mo Trimmed Mean PCE, at 1.60%. Inflation has fallen steadily from 1.94% reported in Jan 2017. Falling inflation is the result of a slower pace of discretionary government spending as noted in my earlier commentary on the differences in Real GDP vs. Real Private GDP. The lower the inflation the more valuable earnings become. Investors bolstered market prices in 2000 on the belief that Internet companies would nearly eliminate inflation and the SP500 saw a P/E over 35 briefly. The SP500 Value Investor Index was priced less than 50% of the SP500 levels (SP500 priced more than 100% of the Value Investor Index).

Today the SP500 is only priced a modest 15% higher than the SP500 Value Investor Index and facing an acceleration of global economic activity. Decently higher corporate earnings remain ahead in my opinion based on labor demand indicators and rising Chemical Activity Barometer(CAB). 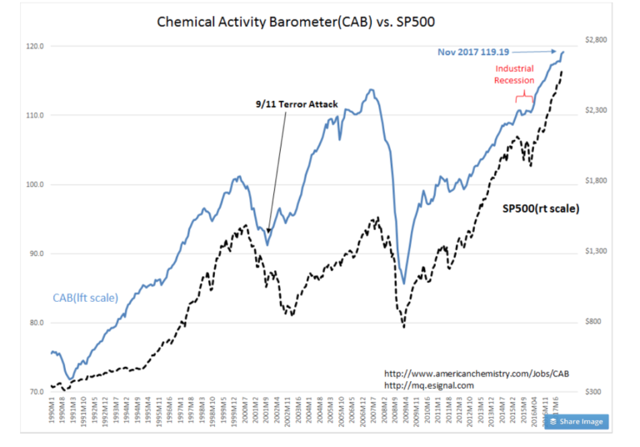 Our discussion of trading ideas has moved to the weekly Stock Exchange post. The coverage is bigger and better than ever. We combine links to trading articles, topical themes, and ideas from our trading models. This week’s post covers the interesting and profitable approach of finding contrarian trades. Model performance updates are published, and of course, there are updated ratings lists for Felix and Oscar, this week featuring the Russell 1000. Blue Harbinger has taken the lead role on this post, using information from me and from the models. He is doing a great job.

Sorry that I cannot update links this week. I hope we’ll get some suggestions in the comments. We will all have plenty of work to do in the week ahead.

My expectation is that stocks will continue to track the improvement in earnings expectations. If the 10% earnings boost is accurate, that is how much we might expect stocks to increase. Current levels are about 18.3 times forward earnings. This multiple is normal when interest rates (ten-year note) are below 4%.

One key question is timing. If corporate rates are not cut until 2019, the economic effect will be more gradual. Last week’s trading included some “trading” moves on the Washington news. It seems to confirm the conclusion that little if any of the current market valuation is based on the new tax policy.

I realize that many are pleased and many displeased by the tax changes. The opinions are strongly held. Neither anger nor glee will help your investment returns. 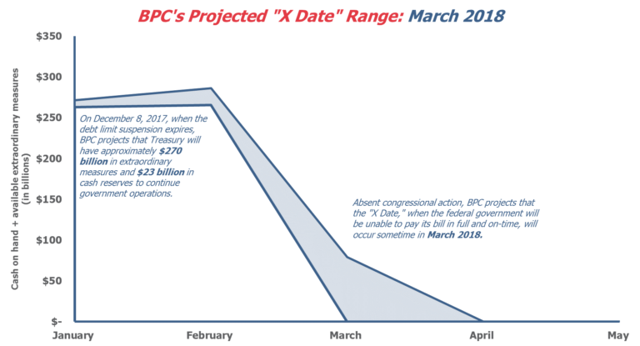 Answer to aircraft carrier problem: Unlike a commercial landing, the carrier pilot goes to full throttle right at touch down. Depending upon conditions, 8 – 15% of landings do not catch the tail hook, even when the approach is accurate. The pilot would not know that the hook missed until it was too late. The system of winches plays out cable and are strong enough to stop the plane, even at full thrust. They call it an arrested landing!

Disclosure: I/we have no positions in any stocks mentioned, and no plans to initiate any positions within the next 72 hours.

I wrote this article myself, and it expresses my own opinions. I am not receiving compensation for it. I have no business relationship with any company whose stock is mentioned in this article.