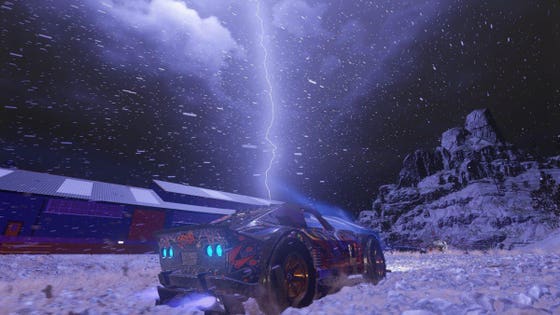 Onrush is a very different kind of driving game.

When I first booted up Onrush on my Xbox One X, I was fully expecting some kind of neon-infused, amped-up, spiritual continuation of the developer’s previous Motorstorm games. Something improved but safe, modernized yet familiar. What I got instead was a genre-shattering wrecking ball, a giant middle finger to standard driving game conventions. Onrush isn’t about racing at all, it turns out. It’s about reflexes, pure adrenaline and possibly most importantly, the kind of cooperative strategy usually reserved for hero shooters and tag team fighters.

I won’t lie—the early hours of Onrush were admittedly overwhelming and unexpectedly confusing for this seasoned gamer. Yes, the basic mechanics of commandeering the game’s virtual two- and four-wheelers won’t trip up most experienced players, especially if you’ve mastered a fair share of off-road rally games. But it’s just beyond these fundamentals that instinctual play goes flying out the mud-caked window. See, there’s no finish line and no placing in Onrush’s races, a complete lack of traditional first, second and third rankings to strive for. There’s only a massive, shifting, battling pack of vehicles chasing down specific objectives, and if you fall far enough behind, the game warps you back into the action. It’s Mad Max with less sand and guns, and minus that guitar-riffing marionette weirdo.

If can manage it, play Onrush on a 4K display.

The modes available are relatively diverse and interesting, if a little lacking in sheer number. Overdrive, for example, has contestants accumulating points for their team by linking boosts and Burnout-style takedowns. Lockdown sees the relentless pursuit and tenuous claim of fast-moving, highlighted sections of track, while Countdown requires driving through green gates that add precious seconds to your team’s constantly diminishing timer. Then there’s Switch, which is an elimination mode of sorts which forces downed players to swap out for the next available steed. Regardless of the flavor, it’s all team-based, and in this way, the overarching effect is strangely reminiscent of Overwatch. Individual accomplishments are encouraged but ultimately trumped by the squad’s aims and the push-pull of group competition. It’s incredibly different for a driving game and takes some getting used to.

Speaking of Overwatch, the game’s vehicle roster bears striking resemblance to Blizzard’s varied battler lineup. Not in art direction or character design, per se, but in class distribution and special abilities. You’ve got your tanks, your attackers, your defense personas and also your lightweight speed demons. Each car or motorbike has its own strengths, weaknesses and Rush abilities. Think of the latter as an analog to Overwatch’s ‘Ultimates’, special moves unique to each character that give you a temporary leg up on the competition. You fill up your Rush gauge as you boost, take down adversaries, do tricks and obliterate AI fodder vehicles throughout each event. Once that tank is full, you can unleash a turbo boost combined with some kind of oppositional impediment or ally accouterment. These are always satisfying to activate, though they can be incredibly hard to control.

The tracks in Onrush are pretty phenomenal.

The action here is, without a doubt, extremely intense. At any given moment, you’re one tiny error away from wiping out, one wrong turn from bending your metal frame around the nearest pine tree. This, it feels, is simultaneously the best and worst thing about Onrush. The excitement of so much chaos can be exhilarating, but it can also seriously impede your basic sense of control. I can’t even count how many times I crashed just because I literally couldn’t see what was coming up in front of me. On that note, there’s a seemingly random nature to some of Onrush’s difficulty, and a sort of learned helplessness that can overtake various stretches of repeated failure, especially online against grizzled veterans. Every so often I’ll get thrown into an event during which I never can survive for more than a few seconds, getting wrecked from all angles the moment I spawn in. This issue has alleviated somewhat as I’ve naturally become more proficient at the game, incorporating new strategies and better utilizing certain abilities.

It helps that from a technical standpoint, Onrush is a mechanical marvel. The game’s engine was built from the ground up to support dynamic weather, constantly shifting lighting and up to 24 cars on-screen at once. It looks gorgeous on Xbox One X, which can run the software at either 30 fps/4K or an unwavering 60 fps/1080p. I usually stick to the latter, though early on I was running it in 4K just to slow things down as I got my bearings. I will say that sometimes the dynamic weather, especially the snow blizzard effects, can really get in the way of gameplay. That’s probably intended, but I often felt it to be too detrimental to my field of view.

Be prepared for a rather steep learning curve.

When everything is clicking, Onrush feels amazing, but until your skill can catch up with the insanity that’s happening on-screen, I can see this being a frustrating experience for less patient gamers. The career mode offers plenty of single player challenges to take on, while the online multiplayer runs smoothly and is definitely where the game shines, if you can get enough live players to jump in, that is. There’s also tons of neat unlockables—vehicle skins, driver outfits, tombstones (customized markers you leave behind after wrecking)—to earn via in-game currency and gear crates, which don’t integrate microtransactions, at least not yet. I can see myself playing this for a long time to come, as long as the online community stays active.

Even after hours of play, Onrush remains wonderfully difficult to classify. The stomach-churning drops of Hydro Thunder. The insane crashes of Burnout. The combo system and radical attitude of SSX. The nail-biting cooperative multiplayer mayhem of Overwatch. It’s a recipe that probably shouldn’t work as well as it does, and despite a steep learning curve, it creates what feels like the next evolutionary step in driving games. Or, at the very least, the initial iterative lurch toward a completely new genre.