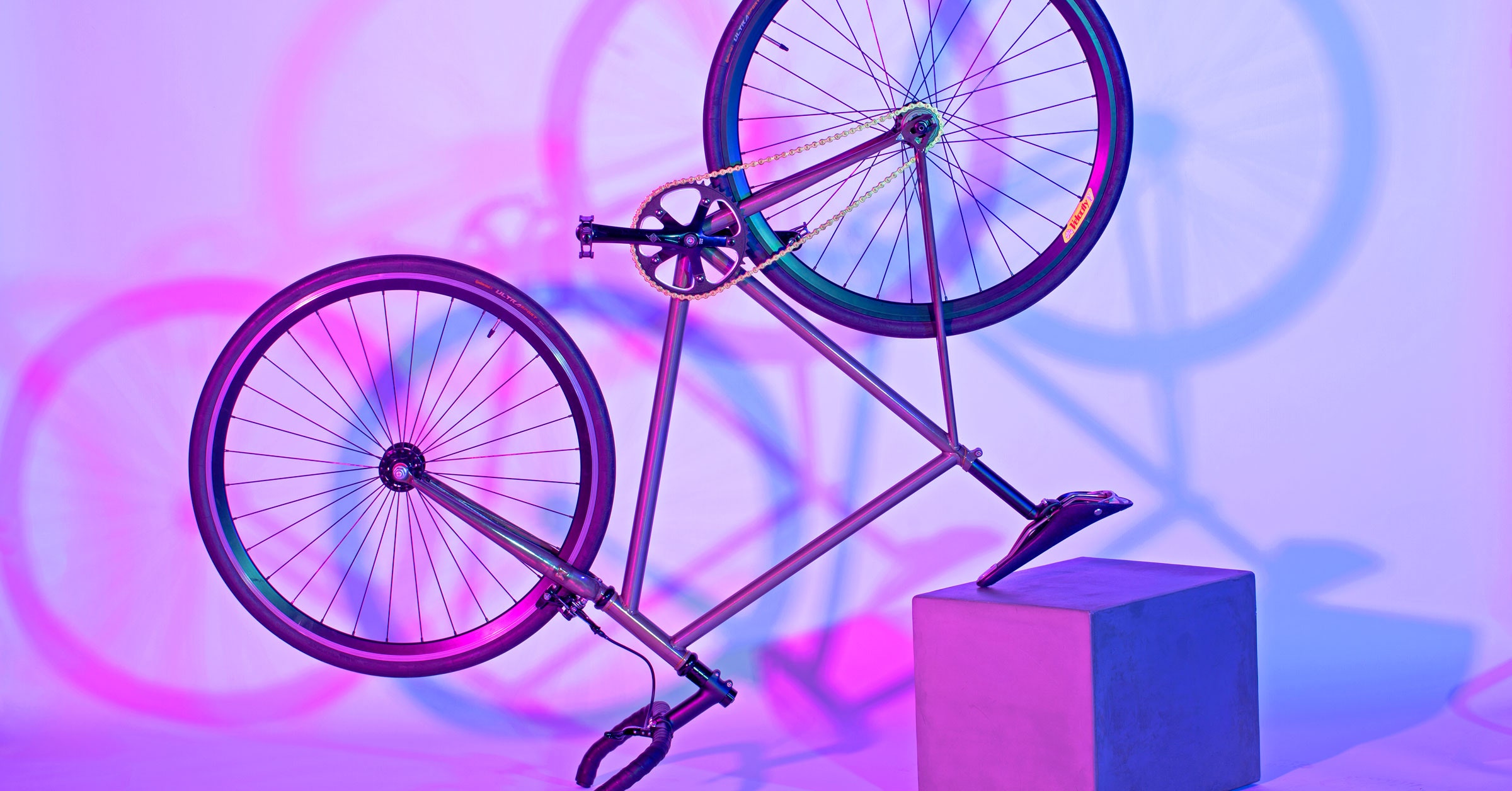 It’s happened to me, it’s happened to you. You walk out of a concert, a restaurant, or the office at an hour well past sunset, go to unlock your bike, and you realize you don’t have your lights. Maybe you forgot to charge them and they’re as dead as beans. Maybe you forgot to bring them entirely because it’s the summer and they daylight hours are long. Maybe they were stolen off your frame—in which case you’re lucky they didn’t take the whole bike.

A San Francisco company called Mission Bicycle has rolled out a new bike design that will never leave an owner in the dark. The frameset has LEDs build right into the fork. Tapping a button sets the front end of the bike alight.

The design is simple and tidy. On the inside of the fork’s arms, there are two LED strips situated vertically. Each strip holds 50 diodes, for 100 lights in total. You press a button on the top cap of the headset to turn the lighting system on and off; pressing and holding the button dims the lights, which helps the battery last longer. There are also five red LEDs built into the seatpost. All of the wiring runs through the frame—from the headset, down the fork, and back to the seatpost.

The whole system uses a rechargeable battery that lives inside the headset. To access it, you unscrew the top cap, and the battery pops up far enough for you to grab it. You can charge it wherever it’s convenient using a USB cable.

Integrated lighting systems aren’t unique in the cycling world. You can find a number of commuter bikes with headlights built into the frames and tail lights built into the seat posts. But what makes Mission Bicycle’s design notable is the ease with which the lights blend into the design. Walk past the bike on the street, and you won’t notice the LEDs or the on/off switch unless you’re really looking for them. It stays fully hidden and makes for a clean, minimal look. More importantly, it means you always have your lights with you—as long as you remember to charge the battery.

Mission Bicycle leant me a bike to ride for a couple of weeks. The company sells fully customized city bikes starting at $1,100, and it offers a bunch of different options for drivetrains, components, and frame colors. The integrated lighting system is available as an option on every build. My loaner was a singlespeed; a simple, easy roller.

When you fire up the LED systems, it illuminates a big circle of pavement around the front wheel, about four feet in diameter. The effect is eye-catching in a way that a forward-facing headlight isn’t, and since the LEDs are visible from the side too, it easily makes you the most noticeable vehicle in the bike lane. The light itself is a cool blue, which at first seems a bit harsh, but only helps you stand out more alongside the yellowish glow of the overhead sodium bulbs that illuminate the roadways. The battery lasted the whole time I had the bike, and if your commute involves less than an hour of night riding each day, I imagine you’d have to charge it once every three or four weeks.

Two caveats. One, the lighting system makes you visible to others on the road, but doesn’t direct light far enough in front of you to fully illuminate the road ahead. The company’s reasoning is that, in a city, the streets are generally well lit enough that being seen is a higher priority for your safety than seeing where you’re going. Sure, but if you don’t live in a city with well-lit streets, you’ll need a headlamp. Second, the crown that you unscrew to get at the battery isn’t fully secure. So if a thief is knowledgeable enough to look for the little rubber on/off switch, they can steal your battery (or the top cap) pretty easily. The folks at the shop tell me they are working on a solution to this. For now, maybe just slip the battery into your pocket when you leave your bike locked up outside the bar. No biggie.