In April of this year, I wrote an article discussing the 10 reasons the bull market had ended.

“The backdrop of the market currently is vastly different than it was during the ‘taper tantrum’ in 2015-2016, or during the corrections following the end of QE1 and QE2. In those previous cases, the Federal Reserve was directly injecting liquidity and managing expectations of long-term accommodative support. Valuations had been through a fairly significant reversion, and expectations had been extinguished. None of that support exists currently.”

It mostly fell on “deaf ears” as the market rallied back to highs. But the “worries” of the market have continued to mount despite the speculative rally. As Barbara Kollmeyer penned yesterday morning:

“The markets have enough to worry about these days, right? With major U.S. indexes in or near bear territory, a government shutdown underway and the White House falling over itself to assure us no one is firing Fed Chief Powell, Treasury Secretary Steven Mnuchin gobsmacked market participants by revealing that he made a weekend call from a beach in Mexico to the country’s six biggest banks, presumably to assure Wall Street that there’s ample liquidity sloshing around in the financial system.”

I can only presume the phone call between President Trump and Steve Mnuchin went something like this:

Trump: Hey, Steve. This market is bad. I mean it’s really bad… really bad. You need to do something to make it go up. I mean really go up.

Mnuchin: No problem. I’ll just call my buddies and tell them they need to start buying. You know, we can always hit up the “Plunge Protection Team” if we need too.

Trump: The what? Oh yeah… I’ve heard of those guys. Yeah, you do that. We need this market to go up really big. I mean really big. I got a whole big pile of s*** going on here, my ratings are down, and I need the market to go up. I mean go up a lot. You make that happen, okay. Cuz that a**hole Powell ain’t helpin’ me one bit.

Of course, the only real reason that you would call the 6 major banks, and meet with the “Plunge Protection Team,” would be in the event there was a real concern about the financial stability of the markets. It didn’t take long for the markets to figure out there may be a real liquidity problem brewing out there (aka Deutsche Bank) and as Mark Decambre penned Monday afternoon:

“The S&P 500 index fell by 2.7% Monday, marking the first session before Christmas that the broad-market benchmark has booked a loss of 1% or greater – ever.”

If we take a look back at the markets over the last 20 years, we find that our weekly composite technical gauge has only reached this level of an oversold condition only a few times during the time frame studied. Such oversold conditions have always resulted in at least a corrective bounce even within the context of a larger mean-reverting process.

What this oversold condition implies is that “selling” may have temporarily exhausted itself. Like a raging fire, at some point the “fuel” is consumed and it burns itself out. In the market, it is much the same.

You have always heard that “for every buyer, there is a seller.”

While this is a true statement, it is incomplete.

The real issue is that while there is indeed a “buyer for every seller,” the question is “at what price?”

In bull markets, prices rise until “buyers” are unwilling to pay a higher price for assets. Likewise, in a bear market, prices will decline until “sellers” are no longer willing to sell at a lower price. It is always a question of price, otherwise, the market would be a flat line.

This also highlights the importance of long-term moving averages. Again, as noted above, given that prices rise and fall due to participant demand, long-term moving averages provide a good picture of where demand is likely to be found. When prices deviate too far above, or below, those long-term averages, prices have a history of reverting back to, or beyond, that mean. 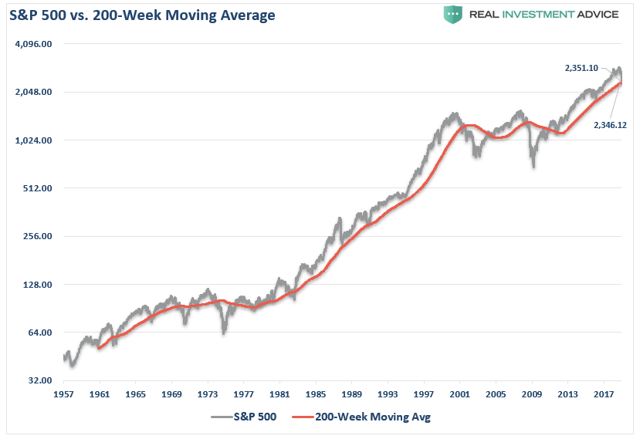 Currently, the bulls remain in charge for the moment with the market sitting just a few points above the long-term average. A weekly close below 2,346 on the S&P 500 would suggest a deeper decline is in process.

The same goes for the 60-month (5-year) moving average. With the market currently sitting just above the long-term trend support line, the “bull market” remains intact for now. 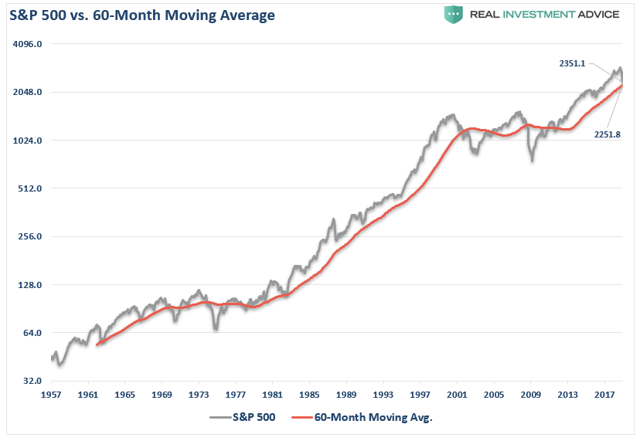 Again, a monthly close below 2,251 would suggest a more protracted “bear” market is underway.

How Much Of A Bounce Are We Talking About

Looking at a chart of weekly closes, the most likely oversold retracement rally would push stocks back toward the previous 2018 closing lows of 2,620-2,650. 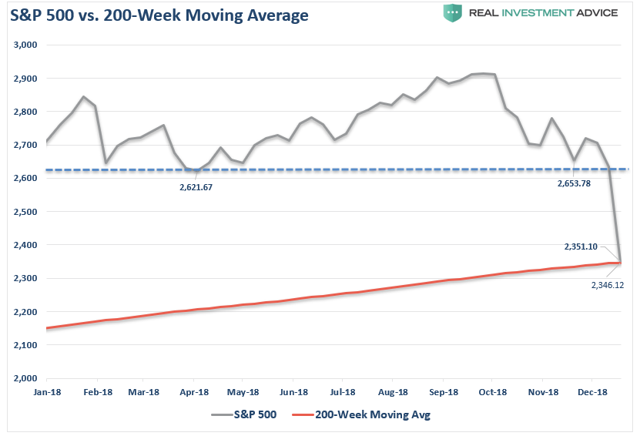 On a monthly closing basis, however, that rally could extend as high as 2,700. 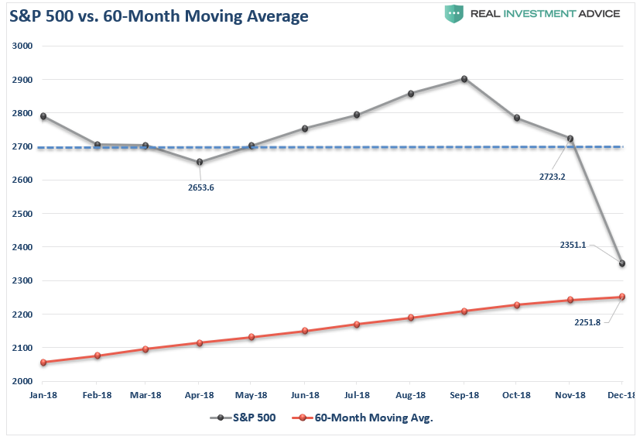 A rally of this magnitude will get the mainstream media very convinced the “bear market” is now over.

It likely won’t be.

The one thing about long-term trending bull markets is that they cover up investment mistakes. Overpaying for value, taking on too much risk, leverage, etc., are all things that investors inherently know will have negative outcomes. However, during a bull market, those mistakes are “forgiven” as prices inherently rise. The longer they rise, the more mistakes that investors tend to make as they become assured they are “smarter than the market.”

Eventually, a bear market reveals those mistakes in the most brutal of fashions.

It is often said the religion is found in “foxholes.” It is also found in bear markets where investors begin to “pray” for relief.

Very likely, there are many investors who have learned of the mistakes they have made over the past several years. Therefore, any rally in the market over the next few weeks to a couple of months will likely be met with selling as investors look for an exit.

Here is the other problem, there is currently no supportive backdrop for stocks on the horizon:

You get the idea.

There are a lot of things that have to go “right” to get the “bull market” back on track. But there is a whole lot more which is currently going wrong.

As I wrote in “The Exit Problem” last December:

“My job is to participate in the markets while keeping a measured approach to capital preservation. Since it is considered ‘bearish’ to point out the potential ‘risks’ which could lead to rapid capital destruction; then I guess you can call me a ‘bear.’

Just make sure you understand I am still in ‘theater,’ I am just moving much closer to the ‘exit.'”

After having sold a big chunk of our equity holdings throughout the year, and having been a steady buyer of bonds (despite consistent calls for higher rates), my “Christmas Wish” is for one last oversold rally to “sell” into.

The most likely outcome for 2019 is higher volatility, lower returns, and a still greatly under-appreciated risk to capital.

But, for the bulls, it’s now or never to make a final stand.

Just remember, getting back to even is not the same as growing wealth.