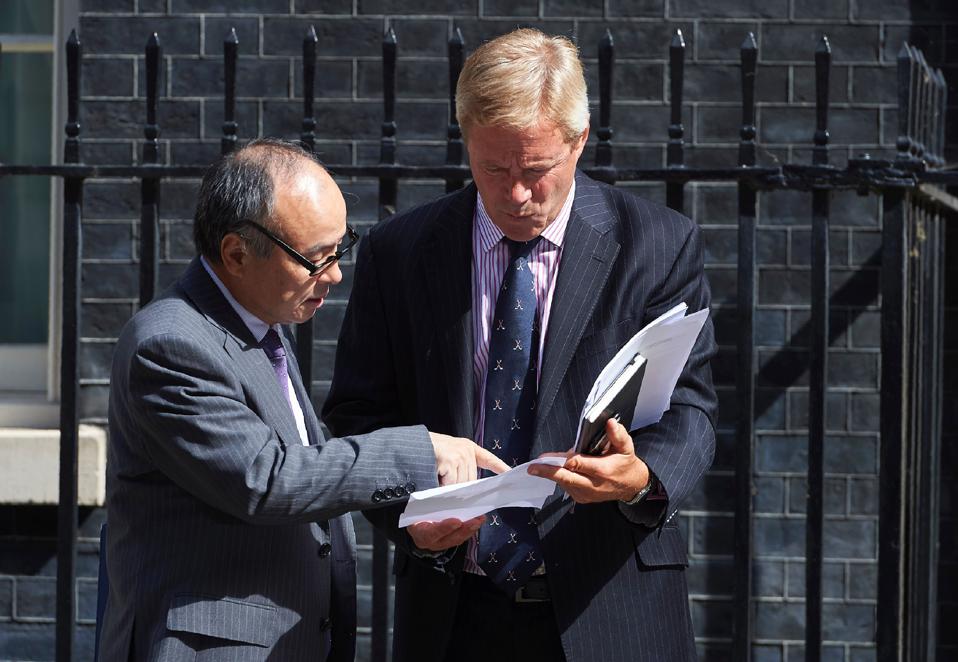 Enough paperwork already: Masayoshi Son of SoftBank and Stuart Chambers of ARM Holdings didn’t have to trawl through thousands of documents to clarify each others intellectual property, thanks to a clever AI tool. (Photo credit should read NIKLAS HALLE’N/AFP/Getty Images)

Something strange happened when Softbank bought the powerful chip designer ARM for $32 billion in July 2016.

When it came to doing the due diligence on ARM’s patents, the usually long-and-labourious process that can last for weeks on end, sped through in just a couple of days.  The reason was software powered by artificial intelligence that could read documents at light speed, compared to humans.

Both Softbank and the law firm Slaughter & May, which represented ARM during the deal, used the same AI-based tool to trawl through both ARM’s and Softbank’s patent portfolios.

The searches, which would have taken weeks and cost thousands of dollars with human lawyers, took just a few seconds, says Nigel Swycher, whose startup Aistemos built the patent-trawling tool. London-based Aistemos says it has just raised £3 million (about $4 million) from investors including Beringea Capital.

Increasingly, companies like ARM and aerospace firm BAE Systems are using such software not just to skimp on patent-lawyer fees, or to keep a watchful eye on the competition, but to also look for a broader range of acquisition targets and even scout for licensing opportunities.

Recently, a digital-money firm used Aistemos to find out who owned a patent in the area of ATM cash transfers. When the firm consulted Swycher’s team, it was surprised to find it was the one company holding such patents. “Lots of people own patents they don’t know about,” says Swycher.

Swycher, 56, argues that AI-powered software which can read and analyze thousands of pages of technical information in seconds can dispel much of the confusion around what types of patents exist.

Over time, that could also crack open a trillion-dollar global marketplace that’s been manned primarily by patent lawyers till now, making it accessible to insurers, engineers and marketing experts.

A recent report commissioned by his startup suggests corporate executives believe licensing opportunities would increase by 6%, if information about patent ownership was more readily available.

An example of a Cipher report on autonomous vehicle technology.

Swycher lauched his Cipher tool in 2016 after 25 years as a partner at Slaughter & May, a leading law firm for patent litigation, where he helped companies do their patent-due diligence before making acquisitions. He recalls “a lifetime of scars” from chugging coffee in meeting rooms till 3am, while trawling through thousands of sheets of paper.

Manually going through the documents in so-called data rooms (or rooms filled to the brim with patent documentation) was costly and sometimes in vain. Swycher recalls working on a billion-dollar deal, and executives asking his team on Day 60 of deal talks if the company being acquired actually owned the technology that was core to its business.

To answer that question, a team of five people spent two weeks reading through patent documentation and writing reports, at a cost of around $65,000. When it finally got to Day 90 of deal talks, they had devastating results: there were four other patent holders of the same core technology, and one had an exclusive license in China.

The deal was effectively scuppered, but not after tens of thousands of dollars had been spent on advisory fees.

The process was typical, and practically Dickensian, Swycher says. “My customers were people doing M&A, licensing, managing risk, and I got increasingly frustrated that the information we needed to do deals wasn’t there.”

Since launching Cipher in 2014, Swycher’s Aistemos has sold subscriptions costing between $50,000 and $100,000-a-year to around 50 corporate customers, including ABB, Ocado and BAE Systems. The tool, which is browser-based like FactSet, only answers one question, says Swycher, which is “Who is doing what?”

The human equivalent of a single search on Cipher costs $10,000 and takes two weeks. “Our average user does 250 searches a year,” he says, suggesting the service becomes cost effective after about half-a-dozen uses.

“Intellectual property is having something of a revival,” had adds. “Despite being an asset class that existed for 300 years, it has only recently become important for so many companies… Everyday somebody’s filing for a new one, and they need to see what’s already taken.”