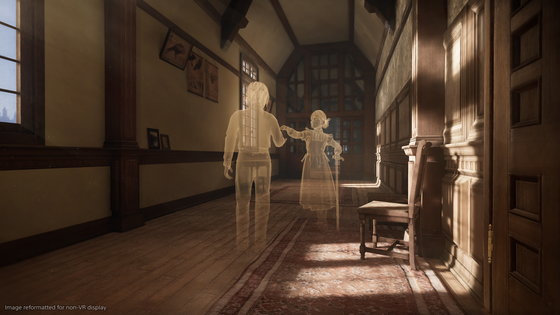 Déraciné is a new virtual reality game developed by From Software and Sony’s Japan Studio for PSVR.

Well, I reported recently that From Software would debut three new games at E3 2018.

I wasn’t right about which games those would be, but I did get the number correct. The third of the three titles is a VR game developed by From Software and Sony Interactive Entertainment’s Japan Studio. The two developers have collaborated in the past on Demon’s Souls and Bloodborne, two of the best video games ever made.

The game is called Déraciné, and it’s a virtual reality take on the classic point-and-click adventure game.

The story unfolds in a secluded boarding school where six children quietly spend their days. It is into this environment that you appear, an unseen faerie existing in a world of frozen time. As the story progresses, time shifts around you, at times even throwing you into the past.

Déraciné’s most important element is the bond between the player, an unseen faerie, and the children of the boarding school. This is shown using fragmented storytelling, where the user pieces events together from scattered story elements and a setting where time is frozen. All of this comes together in a compelling, emotional narrative.

“This title got its start when I asked myself whether I could recreate the classic adventure game with its relaxed pace in virtual reality, giving users an entirely unique experience,” says Miyazaki. “SIE was interested, and I am very grateful to have them as a partner as we develop this game together.

“The result is that the concept behind the title has changed little since those initial thoughts,” Miyazaki adds, “and Déraciné has a warm, peculiar feel to it that is completely different from anything we have done before. I’d love for as many users as possible to give it a try.”

Better still, the game is coming out on PSVR in 2018, though the exact date remains a mystery. I’m not usually all that excited for VR games—often wishing they were just coming out as regular games with VR tacked on—but I’m deeply intrigued by what From Software and Miyazaki will do with this, and I feel like classic point-and-click adventure story is the right way to go for VR.

You can read about the other two From Software games here (Sekiro) and here (Metal Wolf Chaos.)